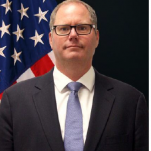 Q: How long have you been involved with The Open Group?   Joint Tactical Networking Center joined The Open Group FACE™ Consortium as a Associate member in July 2015.

Q. What do you do, and how long have you been doing it?  I work with government and industry partners to evolve the Software Communications Architecture (SCA) and Application Programming Interfaces (APIs) in support of the Department of Defense’s policy initiatives for interoperable, secure, and affordable waveforms and wireless communications. This framework and the interfaces separate the software application from the radio hardware and enable portability of software across multiple radio platforms.  I've been with Joint Tactical Networking Center (JTNC) for about three years.

Q: Why did your organization become a member and what does your involvement look like?  JTNC became a member of The Open Group FACE™ Consortium in order to better align the SCA and FACE standards.

Q: How has membership in The Open Group benefited you, your organization and the industry at large?   By participating in meetings I've made new contacts in government and industry.  These new partnerships will help spread adoption of the open standards which will save costs because the software is re-usable and more easily portable.

Q: What contributions do you hope to bring to The Open Group?  Share SCA open standards and subject matter expertise to help implement them.

Q: Why is it important for other organizations to join The Open Group?  It facilitates an exchange of ideas with organizations who wish to align existing open standards and developing new ones when necessary.

Q: What are your hobbies?  I enjoy watching and playing sports and working on various projects with the kids.

Q: What book are you currently reading?  Innovate the Pixar Way: Business Lessons from the World's Most Creative Corporate Playground by Bill Capodagli and Lynn Jackson.

Q.  What social networks do you belong to?  milBook, (DoD professional networking tool) and Linkedin,

Q: Any last thoughts?  I'm looking forward to working with other organizations to evolve the SCA and APIs to meet their emerging needs.

Mr. Frank Van Syckle was assigned as the director, Standards, Joint Tactical Networking Center (JTNC) in October 2013. In this position, Mr. Van Syckle is responsible for developing, maintaining and evolving the Software Communications Architecture and Application Programming Interface standards in support of the Department of Defense’s policy initiatives for interoperable, secure, and affordable waveforms and wireless communications. Prior to his assignment with Standards, he was the JTNC Chief Technology Officer where he led the science and technology program.

Before joining the JTNC, Mr. Van Syckle was the chief of the Network Systems Integration branch then the Network Operations branch for the Army’s Space and Terrestrial Communications Directorate (S&TCD) where he led engineers and research and development projects. Previous to his work at the S&TCD, he was the science advisor at the United States European Command then the United States Central Command where he developed rapid solutions for a wide variety of Joint warfighters' urgent needs.